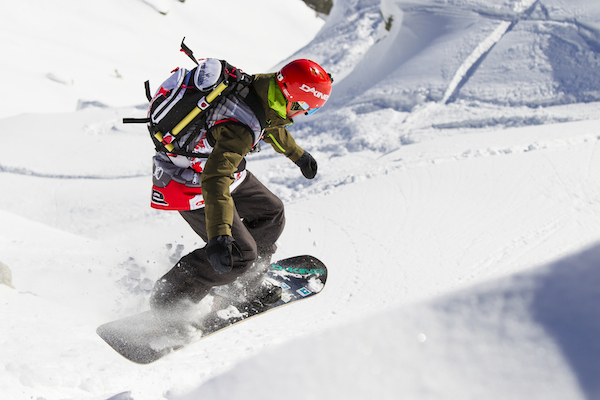 What a show! The best competition of the four years of existing Junior events, according to race director Cyril Neri. And the riders seemed to agree. The 81 junior skiers and snowboarders ripped up the 300 metre Hotel face at Brévent (Clocher/Clocheton Aiguille du Vioz at 2500 metres of altitude, to be exact) in Chamonix with impressive skill and intelligent riding. The competition face was not an easy one, more of a senior than junior face and the most challenging face the juniors have ridden up to date. It is long and demanding. In 2011 the FWT female riders competed on this face! However, a lot of different variations with many features and the best possible snow conditions promised for a great show. And wow did these young talents deliver! Fast, stable riding through awesome powder snow, big airs and few crashes impressed the cheering public and put big smiles on the riders’ faces.

That was the best face we’ve ridden, said Paul Sautelli, from Saint Gervais, France, who once again won the snowboarders category. 16-year old Paul, also a fierce competitor in boarder cross, had a hugely successful season last year, winning the snowboard category overall and proved again that he is a force to be reckoned with, stomping two great airs and charging down the face in three powerful turns! 2013 female winner in snowboard Mauranne Strittmatter, repeated her performance from last year and took first place with a solid run.

Synnove Medhus of Roldal in Norway has experienced the most amazing weekend. Her first time in the Alps and first time competing in the JFT, she totally crushed the competition by skiing a really solid run down the face and taking three airs! She was so happy at the prize giving ceremony; to win, to be in Chamonix and to meet a lot of new friends! Synnove is only 14 but already very familiar with freeriding and competing in Norway. The plan was only to compete in Chamonix but her parents might have to re-schedule her programme so she can do the full season. We hope to see Synnove on the next two events!

Among the guys skiers there are so many talented riders, and some of the younger line up, the 14-15 year olds, put on an amazing show. All three podium winners in this younger age group were definitely giving the older boys a run for their money. With their high points, winner Mathieu Gschwandtner from Austria and second placed Arthur Raskin from France would have placed third and fourth in the older 16-17 years old category! However, the run of the day was performed by local Chamonix skier Aurélien Collet. Familiar with the face, he was confident taking massive air at the technical section and skied an incredibly solid line. What a nice experience to take first at your hometown! Last year Aurélien was second and is definitely on the right path towards the Freeride World Qualifiers next year!

The local mountain guides of Evolution 2 did a great job securing the face and handling the safety of the riders hiking to the face. The Sunday programme with the PGHM (mountain rescue) gave the kids a true avalanche scenario to work with, a really interesting and important exercise for a freerider.

As always the atmosphere among the juniors was on fire. Everyone is stoked to compete and meet friends and for once it won’t be long till next time. Stop number two in Fieberbrunn, Austria is on for next weekend!